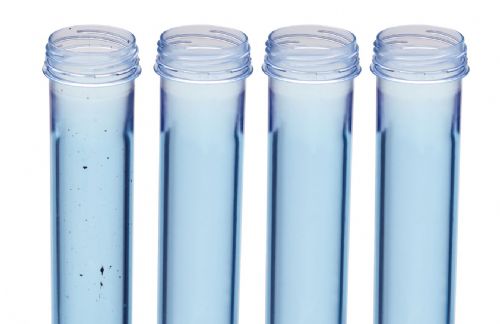 Due to black specks, one European PET moulder was seeing batches of upto four billion preform parts rejected. This led to the implementation of amaintenance programme using Ultra PurgeTM 5160, and with great success.

Although preform defects are noticed as soon as bottles burst in the blowmouldingstation, just a small fraction of non-compliant parts will meanthe entire production batch is rejected. Being forced to scrap good qualitypreforms not only increases production costs but also weakens the supplier'srating.

Moulders commonly find that black specks are being flushed into moulded parts hours after production has started. A key cause is the tendency for liquid colourants to stick to metal surfaces and degrade, causing contamination to build layer upon layer. Add temperature, shear rate and pressure factors to that and, over time, degradation becomes critical.

When layers of contamination reach this level, polymer flow and moving parts act to break those contamination layers up, detaching them from metal surfaces so they flush into moulded parts. This consequence of black speck contamination can last a long time.

As a heavy metal component, the shooting pot has great heat inertia. Its lengthy heat-up and cool-down times contribute to the degradation of the PET resin and pigment in contact with its surfaces. Even empty shooting pots retain a thin layer of resin that will degrade during a regular mould maintenance production halt, or over a weekend.

The severity of the problem depends on following reasons:

If quality controls fail to detect the black speck problem in time and a non-compliant production batch reaches the blowing station, contaminated bottles burst and the entire batch is rejected.

When an Ultra PurgeTM sales representative visited the Italian PET moulder, scrap rates were unacceptable. After an initial test showed the effectiveness of Ultra PurgeTM 5160, Chem-Trend collaborated with the customer to devise a simple yet effective preventive maintenance approach: This saw the introduction of a regime using Ultra PurgeTM 5160 which involved screw and barrel cleaning at the following times: