Servo Drive Technology`s Differences and Advantages Compared to Other Technologies 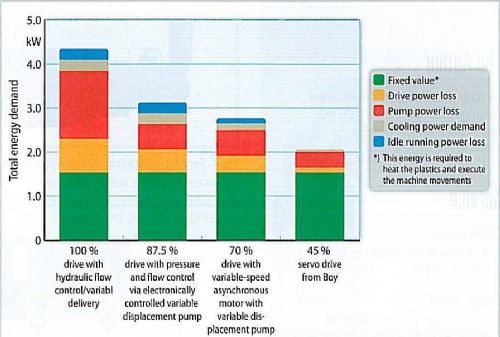 According to EU Directive 2012/27/EU Articles, all companies with at least 250 employees or an annual turnover of over EUR 50 million are obliged since the preceding year to conduct an energy audit and repeat it every four years. The energy audit must conform to DIN EN 16247-1 and be based on current operating data. The only companies exempted are those who have installed an energy or environmental management system that meets standards such as DIN EN ISO 50001. Otherwise they face severe fines.

This so-called "energy efficiency directive" has the purpose of creating a common framework for energy efficiency measures in the European Union.It obliges all companies of the aforementioned size and greater to pursue energy saving policies. An obvious approach is to reassess the drive technology of one's own machinery or at least take it into account when making new purchases.

In the 1980s, a drive with hydraulic flow control (variable delivery pumps) was introduced (Fig.2). This assembly group includes a variable displacement pump, but the result of the hydraulic flow control is that the system only responds very sluggishly. A large number of comparative tests indicate that injection molding machines with this technology consume many times more energy than state-of-the-art drive systems. In addition, there is a high demand for cooling capacity, since the continually running asynchronous motor, together with the pump, emits a great deal of heat to the hydraulic fluid. Due to the high energy demand, the heat emission from the machine is also greater. Nevertheless, many companies still use this technology today.

In 1995, the described variant with hydraulic flow control was superseded by a more efficient drive with DFE pump (Fig.3). This solution has the advantage that the electronic pressure and flow con­trol of the variable displacement pump shortens the response time considerably. From the idle state to the maximum volumetric conveying rate, this drive takes approximately 150 ms. When no pump capacity is needed, the DFE pump switches to idle model.

This has the disadvantage that the electric motor continues to run. Due to the greater variability, the energy demand of this drive is about 8Z5 % of its predecessor with hydraulic A ow control ­ but s till significantly higher than the servo drives that are available nowadays. A drive with a variable -speed asynchronous motor with variable displacement pump has been market ed under the term "servo" in recent yea rs and installed in injection molding machines.

However, the technology has little in common with a genuine servo drive, since the variable-speed asynchronous motor only permits a choice between multiple redetermined operating points, not an adjustment to zero rotational speed. The disadvantages of this model compared to a modern servo drive are its much lower dynamics and higher energy consumption of about 70% compared to the drive with hydraulic flow control mentioned above.

In the case of a modern servo drive with fixed is placement pump (Fig.5) which Dr. Boy GmbH & Co. KG, Neustadt-Fernthal, Germany, was the first European injection molding machine manufacturer to launch on the market in 2008, flow control is achieved by changing the rotational speed. This model generates high dynamics; the maximum rotational speed from idle state is achieved in less than 70 ms. When no pump capacity is required, the servo motor switches off and consumes no energy. The result is a significantly reduced energy demand, which is only 45% compared to the drive with hydraulic flow control,and provides more cycles/minute.

The use of variable displacement pumps has so far always required a constant oil temperature of about 40, since the viscosity-sensitive behavior of the hydraulic components only permitted a small temperature window for flow control. The servo-motor pump drive can be operated over a greater temperature range and already starts at a lower temperature of 2. This saves the user time and energy for starting up the machine. When the new Boy EconFluid is used (Info box), the start-up temperature can be reduced to as low as 18, so that oil heating is not needed at all in most cases.

Besides the high saving potential due to the lower energy input and the shorter start-up times, the user benefits from lower maintenance costs, a halving of the noise emission, higher part quality thanks to better reproducible, and longer life time of the hydraulic fluid. Since less heat is introduced into the oil, the cooling water demand is also reduced.

In future, customers will not only base their purchasing decision on the initial costs, but the life cycle costs will play an important role.

The energy costs over the entire running time thus form a crucial criterion for decision making. For operat­ing the precisely working injection mold­ing machines of the E-series - from the BOY25 E with 250 kN clamping force to the BOYlOOE with lOOOkN clamping force they are very low. And low machine hour rates are the basis for even more cost-efficient parts production. But the lowest machine price is not necessarily the most economical offer, as was experienced by Ulrike Steiner, Managing Director of the Battenberg-based Cena Kunststoff GmbH: "In our produc­tion, we exploit every opportunity to make savings. The continually growing energy and raw materials costs, in partic­ular, bring us to use the most efficient machines and technologies. The Boy E-series machines with servo drive achieve about 55% lower energy de­mand for parts production compared to a hydraulic standard machine"

It is essential that injection molders make a contribution to the energy revolution by using energy-efficient machines. By using injection molding machines with a servo drive, a high degree of energy can be saved compared to the previous mod­els. With every kilowatt hour saved, a servo-motor pump drive reduces the environment burden by about 600 g of C02 emissions- a positive contribution to resource conservation