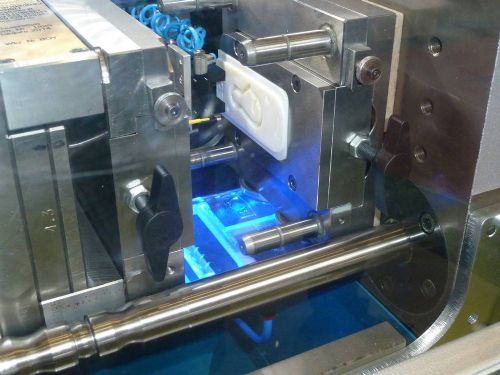 While everyone in the world is raving about 3D-printed parts, the injection moulding machine manufacturer Boy has taken its own, very different, path. Instead of producing each component individually with a 3D printer, Boy and Stratasys have commonly developed a ready-market process, with which mould inserts for injection moulding machines can be produced using 3D-print from plastic.

Thus, prototypes and pilot-series of future injection moulded parts can be produced not only with the series material, but also in series production in the shortest possible time.

The medium-sized family business was absolutely surprised by the response to this concept. At the beginning of April more than 250 participants visited our 3D-information day in Neustadt-Fernthal to learn about the process on site. This figure exceeds significantly the number of Boy employees. Other 3D-events followed. Deputy Boy Managing Director Klaus Geimer still remembers the time after the first presentation of the process at the NPE 2015 in Orlando: "Almost all inquiries after the fair related to the working with printed mould inserts - including inquiries from the automotive industry. For the automotive industry this process is very interesting. Series-related prototypes or pilotseries parts with a behavior that is very similar to that of future injection parts and with which realistic tests are performable, can be produced very fast".

Michael Kleinebrahm, Head of Application Engineering at Boy explains the reason: "Even if 3D-printers process a material that complies with the series production material of the future, the material is always applied in points or in a line. As a result, it is simply impossible to achieve the properties of injection-moulded parts in which the molecules align themselves with the injection process, thus creating a homogeneous component. For the design control and for visible parts, the solidity of printed parts may be sufficient - for functional parts usually not. According to our experience 3D-printed parts only achieve 40 to 60% of the solidity of an injection moulded part. An exact and individual examination is required to find out which solidities are achieved, how close they meet the requirements of the future series part and whether the prototype meets the requirements.

The achievable accuracy is another positive aspect of the 3D-printing of mould inserts. Kleinebrahm: "Principally, the accuracy is the same as that with the 3D-printing of components. However, the printed forms offer the opportunity of a manually reworking and thus an increase of the accuracy of the components. For example, tightly tolerated drill holes can be printed with undersize and then reamed to size. The same applies to the surface, which is relatively coarse in case of 3D-printing. In the case of a 3D-printed insert it can be reworked, i.e. ground or polished. The result of the reworking is injected components with a high-quality surface. In case of a 3D-printing of the parts each individual component would have to be reworked".

Despite all the euphoria, Kleinebrahm warns against exaggerated expectations: "The injection moulding with 3D-printed mould cannot be seen as a kind of "all-rounder". This process is extremely interesting for prototypes and small batches, but it is definitely a prototype process. If companies intend the production of 5,000 parts or more, a careful calculation is advisable".

Klaus Geimer's point of view is similar: "If we look at the entire market, 3D-printing of plastic mould inserts will remain a marginal area from today's perspective, although significant improvements in prototype construction could be achieved. This kind of printing will only complement the injection moulding in its current form but not displace. To change this, the materials would have to be much cheaper and significantly more resilient than they are today. "

The critical point of the process is the durability of the mould inserts. According to Michael Kleinebrahm's experience, a plastic mould insert can be used to produce 100 or even 200 parts, and Boy could produce 700 components from a demonstration part with one mould. But there are also many applications with an extensive wear on the moulds after around ten days so that new mould inserts have to be printed. In these cases it would be possible to print several of the wear-prone mould inserts at a time with the 3D printer. According to Michael Kleinebrahm it is, however, advisable to carefully evaluate this situation or to find another solution.

The probably most simple solution in the case of excessive wear of the plastic mould inserts is offered by Boy.

Michael Kleinebrahm: "For good reason, we use our mould concept with inserts for printed mould inserts, which means that the exchange of a mould is extremely simple - ideal for small batches. With this system the material of the mould insert is of no importance. We can easily adapt the material to the requirements and print mould inserts from plastic, mill them from aluminum and, if necessary, from steel. " Klaus Geimer adds: "This allows the operator of the injection moulding machine with printed moulds to quickly and easily optimize the production of a component and then - if everything works well - to build a suitably adapted mould based on this experience and to use it for the series production." For Geimer it is, however, only an interim solution with limitations in comparison with conventional moulds, but it offers a significantly longer service life than plastic inserts. "

Why a 1: 1 adoption of the mould from plastic to steel is not possible explains Michael Kleinebrahm: "A metal mould has to be set up differently. For example, metal moulds contain cooling systems which are not feasible with plastic. The gating systems are different and offer more and better options for metal. In addition, the pressure during the injection is much lower than with a steel mould, since the channels for the transport of the melt are much larger. "

Pleasant side effect: Plastic moulds require lower injection speeds and lower clamping forces. As a result, relatively large shot weights can be achieved with plastic mould inserts in small injection moulding machines and small clamping forces. The operator does not necessarily have to work with "large" injection moulding machines in the future, when larger components are to be produced.

However, producing larger components also involves certain problems. Michael Kleinebrahm: "We cannot fill huge amounts of plastic into a printed plastic mould, as this is a huge amount of heat for the mould. In addition all the plastic material has to flow through the gating area. The higher the heat the higher the wear. If certain limits are exceeded the process does not work properly anymore".

The first components produced by Boy had a volume of 5 cm³, but relatively fast larger components were produced. This, too, will soon change with further developments of the plastics for 3D-printing. The more robust the material the more plastic can be injected into the mould. At the K 2016, Boy will demonstrate that the limit of the possible size has still not yet been achieved.

Kleinebrahm: "At the moment we can produce components with a projected area of just below 200 cm². We are currently printing a relatively large mould with a very interesting surface structure. The associated component is round with an outer diameter of 130 mm.
What will be demonstrated at the K and how big this piece will be, is still a secret, but a visit at our booth is definitely worthwhile."

According to Klaus Geimer the size is one point, but he is sure that efficiency shall not be forgotten: "Of course, it has to be taken into consideration that for the production of larger parts the printer requires more time to produce the moulds and the need of expensive material increases. All in all, this is even more favourable for a prototype or a pre-series than the construction of a steel mould - especially when the steel mould has to be modified two to three times until it is useable for a series production. Nevertheless, it is no longer sensible to print plastic mould inserts beyond a certain size as the material is very expensive and other manufacturing methods are cheaper - e.g., the use of an aluminium mould."

In any case, prospects for new applications are far beyond the mere size of the components - the process is constantly being further developed by Boy and Stratasys - for example, to be able to process elastomers with the printed forms in the future.

Michael Kleinebrahm: "With thermoplastic elastomers, the use of 3D-printed plastic mould inserts is no problem at all. The difficulty is the processing of vulcanizing elastomers, because the mould is an insulator and so the classic cross-linking process is very difficult to implement. Energy cannot be added which is possible with a steel mould. Another problem: In addition to the high temperatures a high pressure arises in the mould - the mechanical properties of the mould inserts are demanded. "The corresponding tests are still at the very beginning, but the same happened with the 3D-printing of plastic mould inserts for injection moulding at the NPE in 2015, and since then only 1.5 years have passed.

Further future concepts go towards a higher stability of the components. Michael Kleinebrahm: "The incorporation of reinforcements into the components might be a possibility, for example by the integration of fixed long fibers. This would enable us to produce even high-strength components with the 3D printed moulds "

In addition to various automotive manufacturers, suppliers and other plastic processors (which unfortunately can not be named), some contract manufacturers are already counting on the combination of plastic 3D-printing and injection moulding. This might have a positive effect on the further development of the process, according to Klaus Geimer. Today, Boy's technical center is equipped with a Stratasys 3D-printer, and the Stratasys Engineering Center with a Boy injection moulding machine to carry out extensive tests. If prototype parts are urgently required, a service provider can be contacted. They will produce these prototype parts injection moulded with 3D-printed moulds.